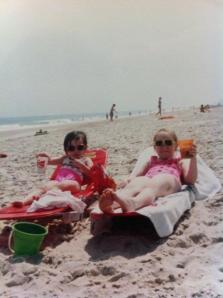 “Show me your puppies!” from an 8-year-old boy? Yes, and to make it worse, he was standing with his grandparents on Ocean Boulevard. It didn’t seem completely out of place for Myrtle Beach, especially considering I was a 14-year-old girl, buzzed up on Sea Mist wine coolers, and getting ready to cruise the boulevard in the back of a friend’s Honda. It was the new Millennium and Myrtle Beach was selling an image to tourists, but locals could buy it, and I did when I was a teenager.

After college I vowed not to return to Myrtle Beach; the tourist’s dream couldn’t be my reality, but life has led me back here. I’m an English adjunct at the local university. While I’ve reclaimed Myrtle Beach as home, there are days when the humidity isn’t what chokes me; sharks in jars, rebel flags, and black tar heroin taint the air.

I went on hiatus in Spring 2013 so I could escape for a one-month writing residency at the Vermont Studio Center. The timing was ideal because I ended Fall 2012 completely disheartened; a self-righteous student grew hostile in a conference because he wanted a grade he didn’t earn. “He reminded me of the Central Park rapist,” a veteran professor later remarked.

I developed a penchant for whisky and worry. I needed money for Vermont, but I also needed something to work out a semester’s worth of knots so I splurged on a two-hour deep tissue massage. While paying, my masseuse told me about a reality show that had been filmed at a mobile home park in Myrtle Beach and was set to premiere on TLC. The show didn’t sound promising for the city’s image.

I asked around and found out that the show would take place at Myrtle Manor. Home for the elderly? No. Reinvented mobile home park? Yes. I couldn’t place Myrtle Manor until I found out its pre-TLC name was Patrick’s Mobile Home Park. I’m not an authority on Myrtle Beach’s trailer park scene, but I know Patrick’s; I pass it on a regular basis when I take Highway 15 to cut to the south strand. While the area has improved, I’ve always known it as an island of misfit mobile homes, crazy curbside trash, and ambient airport traffic.

I was 5 years old when I met Vanna White, hostess for the game show Wheel of Fortune and a native of South Carolina. She was doing a meet-and-greet at Kroger, a grocery store on Kings Highway. As a kid, I was perpetually underweight and ratty looking, but I wanted to impress Vanna so I wore my favorite outfit: a white with black polka dots skort set with an image of turtles in tiny baseball caps on the front. I was feeling bold so I presented Vanna with a red rose. I suppose, as a kid who loved words, I was meeting a woman who turned letters for a living so a rose seemed like the perfect offering.

Growing up, my family’s informal dinner ritual was to grab our dinner trays and watch Wheel of Fortune while we ate. My siblings and I would do this on nights when my parents were running their restaurant or when they were just too exhausted to set the table. I have a vague memory of solving my first puzzle on Wheel of Fortune; the word soda was in the answer. I didn’t want to know the answers before the audience, but I did want to be Vanna White so I could control words, and I thought words would lead to cash and prizes. Now, as an adjunct, I do get to control words, but there’s barely any cash, and there’s never any prizes.

In 1989, Shag: The Movie planted a seed in my mind that made me think I could find love in one wild weekend on Ocean Boulevard. The movie is set in an idealized Myrtle Beach of 1963. Its timeframe didn’t crush my desire “to go to the beach, and meet boys, and go to wild parties, and dance” like the actresses on screen, but I didn’t find boys who could shag. I found boys who substituted grinding for dancing and boys who offered Mardi Gras beads as currency. I won’t lie, sometimes I liked these boys, especially the time I used a fake ID at the age of 15 to enter the Freaky Tiki Club. I downed lemon drop shots, exuded enthusiasm for the eligible bachelor contest, and stumbled out on my sister’s arm.

My boulevard boozing had to end there. My sister drove us to the Wendy’s drive-thru, and I threw up on her dashboard. To give me time to sober up, she took the scenic route home, but I threw up, again. She swerved into a curb while aiming my head out of the window and popped two of her brand new tires in the process. My father bought those tires earlier that day.

Overnight, I learned my life wasn’t Shag, I wasn’t a tourist, and I had more than “48 hours to have the time of my life.” The infamous phrase “Myrtle Beach drunk” gained traction in Danny McBride’s 2006 film Foot Fist Way. Then, in July 2011, Eastbound & Down, McBride’s popular comedy series on HBO, began filming its third season in Myrtle Beach, “the butthole of the Carolinas” according to McBride.

McBride is southern by birth so his satire of the South has been earned, but his sharpened mockery likely goes over the heads of the rednecks he’s ridiculing. The reality show Welcome to Myrtle Manor follows this trend by portraying a Bizarro Myrtle Beach in the confines of a local trailer park. TLC’s blog told potential viewers to “Think Here Comes Honey Boo Boo meets Melrose Place.” Southern pageant children get jacked up on Go-Go Juice, sleep with their neighbors, and burn down buildings? Almost.

At times, the tenants get Myrtle Beach drunk and Melrose dramatic. There’s a megaphone wielding landlady, the entrepreneurial Wiener Girls, a tatted club promoter, a Xeroxed Keanu Reeves, and a hair salon aptly named Tangulls. Marvin, the rent-a-cop, and Bandit, the jingle writer, are probably genetic experiments gone wrong, but the other cast members resemble plausible people. Even though the show devolves into meta-surreality, vacationers created Myrtle Beach’s mythology long before a network decided to profit from it. If the show actually convinces viewers to move here, buyers please beware of trailer park remorse.

For 23 years my parents had a restaurant on a fishing pier 20-minutes south of Myrtle Beach. When they brought my sister and I to work, they would let us play in the sand in front of the restaurant’s windows. They warned us, “Don’t ruin your clothes” and “don’t get your sneakers wet,” but we couldn’t resist the moment when low tide transitioned to high tide. The game was island, and we weren’t supposed to play it.

Hurricane Hugo, a category 4 hurricane, washed away the pier in 1989. The circular bases left in the seabed were the pier’s lost legs. Right before the tides changed, we ran through the wet sand to the farthest base, jumped on it, hung out and eyed the tide. When the water lapped the side of our island, we claimed a second piling. The tide continued to rise and forced us to abandon our newest settlement in exchange for one closer to shore. The process continued until we occupied our islands longer than we should have. Inevitably, our sneakers would get soaked, and occasionally we swam to dry land. We squished to the restaurant’s back door where our father always had two buckets of hot water waiting for us; he would wash and dry our salty legs.

When I tell people I am from Myrtle Beach I am usually met with one of two expressions: wide-eyed envy or leery-eyed repulsion. The only time the expression truly diverges from these two possibilities is when it’s a person from a place with an equally fraught identity: Daytona Beach, Atlantic City, Las Vegas, and the like. The envious are those that envision Myrtle Beach as an eternal spring break or an endless summer. They don’t see the weathered waitresses getting up at 5 am to sling grits or the drained doctors attempting to help the sick and afflicted. The repulsed are those that picture wasted girls flashing for beads on the boulevard or drunk golfers on vacation screwing local strippers. They don’t see the reward posters for the girls that are still missing or the golden handcuffs on the strippers who can’t stop dancing.

Myrtle Beach will always be a protean place. You can have a raunchy bachelor party, a wholesome family vacation, and a spiritual retreat all within city limits. When I have a shitty day I can go the beach and let the waves lull me to sleep, or I can ride the SkyWheel and watch my world shrink, but you’ll usually find me chasing my nieces and nephews along the shore. You won’t find me cruising the boulevard or partying with the cast of Myrtle Manor; I’ve already made my Myrtle Beach mistakes, but feel free to visit and make some of your own.