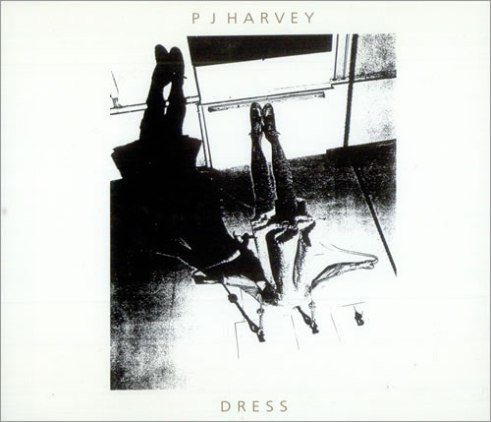 Last PJ Harvey Tuesday, I wrote about “Pocket Knife,” in which the narrator begs her mother, “Please don’t make my wedding dress” because “I’m too young to marry yet.” It’s a relatively late-era song, off Harvey’s 2004 album Uh Huh Her, but dresses have been troubling her lyrics since much earlier.

In fact her very first single, back in 1991, was called “Dress.” In this one, the dress in question is a gift from the narrator’s boyfriend, to wear when they go out dancing. One problem: “It’s hard to walk in the dress, it’s not easy / I’m spinning over like a heavy-loaded fruit tree.” Another problem: The boyfriend seems to think not only that he’s entitled to choose her wardrobe for her, but also that he has improved her as an ornamental possession by doing so. In fact, she should probably be grateful for his financial and cosmetic largesse: “‘You purdy thing,’ my man says, ‘but I bought your beautiful dresses.’”

“Dress” wasn’t just Harvey’s first video—it was the director’s first video, too. Her name is Maria Mochnacz, and she met Harvey in a photography class; at the time, she was also dating John Parish, who played in Automatic Diamini with Harvey. “I’d never made a video before,” Mochnacz told the Guardian, “but Polly seemed to have faith in me.”

So if the video seems a bit amateurish, well… it is. It was everyone’s first time, an orgy staged by virgins. Plus, says Mochnacz on her website, “we could only afford to buy and process 12 minutes of film so bits of the video are repeated played forwards & backwards.” (Hey, if it’s good enough for Beyoncé…) The shoot took place in “a circus school called ‘Fooltime’ in Bristol,” which helps explain the swinging trapeze, if not the assembly (forward and backward) of wooden cutouts of Harvey’s dress-clad silhouette. This makes me feel a little less dorky for going to Jazzercise classes at a circus school twice a week, though I’m not sure I’d feel better if my venue were also named “Fooltime.”

Many of Harvey’s longtime collaborators (including Mochnacz’s now ex-flame John Parish) are people she started working with during the same era, but of these, Mochnacz is the only woman—and it shows. She photographs Harvey in a way most male photographers wouldn’t/couldn’t: as an agent rather than an object. This approach is already apparent in the “Dress” video, where glimpses up Harvey’s skirt read as an indictment of the shortcomings of the garment, not as the sort of calculated teases with which so many music videos try to assure you that their female singers are super sexy but, like, totally not slutty at all, that would be gross, ew.

After the “Dress” video, Mochnacz shot the video for Harvey’s next single, “Sheela-Na-Gig.” And after that, she shot the iconic cover for Rid of Me, and videos for that album’s singles. And then she did the same thing for the next album, and so on and so forth, and now, over twenty years later, nearly all of PJ’s album art and videos are still done by her old school friend Maria.

Who knows—she might even let Mochnacz recommend dresses to her.