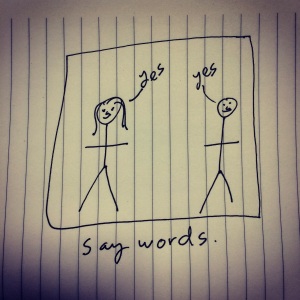 Recently my Facebook feed has lit up with narratives from women in the lit community writing about sexual assault on Tumblr and Medium, naming names of people who have abused them and telling their stories. People are sharing these narratives and supporting the women and starting movements and holding meetings and in some ways, I think this whole thing is great—not the assault part obviously but the community building part, the coming together and trying to change things part. In some ways though, I have found this whole thing exceptionally distressing—what are the consequences of naming someone an abuser online? How do we as women take responsibility for ourselves while demanding accountability from men WITHOUT vilifying half the population? How do we talk about sexual abuse and assault in an honest and open way without victim blaming or turning into a mindless angry mob?

A couple of the stories I have read online go like this: a girl goes home with a guy, gets in his bed, doesn’t explicitly say no to his sexual advances even though she wants to and ends up having sex with the guy and then feeling shitty about it afterwards. This is a really awful and common situation and it is massively, MASSIVELY fucked up that most women will deal with some variation of this at some point in their lives. Whether they go home with a guy or don’t, whether there is penetration or not, I don’t know a single woman who has not had at the very least one sexual experience that they would consider non-consensual. Most of us, and I say “us” because I am a woman and this has also happened to me, experienced this kind of thing in our late teens and early twenties, a time when we were naïve and dreamy eyed about boys and the boys themselves were babies or else much older guys who were hooking up with young girls because of that exact naivety.

I’m 32 now, as of Saturday, and reading these stories from younger women in my sort-of-community online makes me think we slightly older women writers have failed our younger sisters and our brothers in a pretty big way—we’ve failed them because allegedly we are people who tell stories and try to get to some truth about humanity and yet we’ve kept our mouths shut on this really important issue: your body is yours and it is your absolute right and responsibility to take care of it.

Now, before you accuse me of victim blaming, hear me out. I’ve written before about our cultural problem with men controlling women’s bodies—last week it was in regards to PMS or before that, body hair—and I think the depth of this problem is what we see played out over and over again in terms of unwanted sexual encounters: women do not consider their bodies their own. They are taught, WE are taught, from a very young age that someone else has the final say on our outsides; think about the common story of a little girl getting a pair of scissors and chopping off a chunk of her OWN HAIR and the ensuing horror and chaos and trips to the stylist. Why do we give a single fuck about what a little girl does with her own hair? What clothes she wears? What type of princess she is for Halloween? How muddy she is or how many bruises she has on her legs from falling on the playground? This is the beginning of the subtle story that as a female person your body exists to please others. So it starts with “Brush your hair” and “Are you seriously wearing that to school picture day?” and it shouldn’t be even mildly surprising that when we end up drunk in the wrong place with the wrong person or even sober in the right place with the wrong person, it is incredibly difficult to suddenly become a powerful warrior who owns her own skin and can say: “No. I do NOT want to have sex with you.”

Because not only do we, especially as young women, not necessarily believe we have any say in the matter, we also don’t want to hurt anyone’s feelings—“Don’t hurt anyone’s feelings” being the second most important lesson little girls are taught, right after and often intertwined with “You’re body is not your own.”

This is a deep cultural problem and the solution is going to be more than just about giving women dominion over their own bodies. It’s also going to have to be about teaching men that women’s bodies do not belong to them, that consent MUST BE AFFIRMATIVE (“yes means yes” not “no means no”) and that everyone has to be explicit with their intentions. You can’t, as a man OR a woman, tell someone they can come stay with you for free, or crash when they are drunk, if what you really are expecting is sex. As uncomfortable as it is, we are all going to have to start having these conversations, both ways. As women too, we need to actually say the word “no.” We need to get out of the bed that makes us uncomfortable and leave the room. This is where I think I have failed, and many other people my age have. We haven’t looked in the eye of the person who was doing something to us that we didn’t like and said: “No. I do not want to do this.” Instead we went along with it and the guy thought it was okay and it kept happening.

Now women are writing about it online and I think that is great. What I don’t think is necessarily great though is outing these men by name. I think each of these guys needs to hear the story of how these sexual experiences were perceived by women and if the cases are assault, the women NEED to call the police and the police NEED to be responsive. But if these cases aren’t abuse, if they are super shitty and awful misunderstandings, then we need to start talking to each other, not just on Tumblr or Facebook, but in the real actual world. Labeling someone as an abuser online is not the beginning of a conversation: it’s the end of a conversation and the beginning for them of a life on the defensive. They will never be allowed to talk about their experience of the same event, they will never be open to learning how their actions impact other people and they will never, ever change. It’s scary, but we need to look each other in the eye and say what it is we are feeling because none of us are mind readers and all of us are in this together. We need to change the cultural, not pick out a few bad guys to burn at the stake, because if this is so common that it happens to nearly every woman, than it has to be perpetrated by many, many men. They can’t all be evil but they can definitely all be drastically and dangerously misinformed.