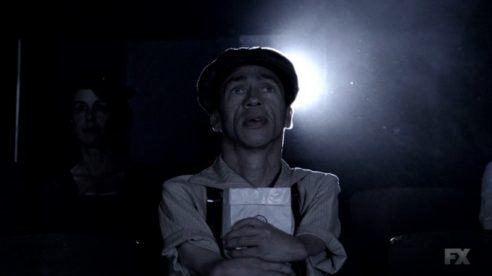 Paul, before he got cool tattoos.

In episode 4 of American Horror Story: Freak Show, the tents are aflutter with Edward Mordrake’s green fog. It’s still Halloween night, and Mordrake dutifully visits the freaks to see which sad soul he can take back with him to whatever Dropbox-purgatory he lives in. Suzi wearily explains to Mordrake how her parents abandoned her as a toddler after she lost her legs, which led to a life in a children’s home, and then on the streets. She admits to stabbing a dancing panhandler out of jealousy matter-of-factly, not disagreeing when Mordrake speculates that the guy she murdered in cold blood inspired her to become a performer herself. Paul tells Mordrake about growing up with bullies he was unable to defend himself from. The cinema’s depiction of American “opulence and glamour” influenced his decision to move to the States in time for the Depression. His unusual appearance wasn’t received well by Americans, who are used to opulence and glamour, and he decided to look even horrible-r and cover his body with tattoos. Except his handsome face, which he could’ve ruled the world with in a “normal body,” maybe. Both Suzi and Paul’s souls are spared from joining Mordrake’s creepy clique.

Elsa finally figures out who Mordrake is, and insists she doesn’t count because she isn’t a freak, but Mordrake thinks she’s weird enough, and his demon face wants to know how she lost her legs. Cut to black and white footage of “sexual chaos”: Dark corridors of guys kissing; a sultry pregnant lady being fawned over by naked guys; a lady peeing into a teacup with the force of Old Faithful. According to Elsa, Germany was wildin’ out in 1932 after surrendering in war, and went to bed with the strange to cope with it. Elsa found success working as a dominatrix and attracted the attention of the Watchers, who started casting her in their “blue films,” which is a cute nickname for snuff films. On a shoot one day, Elsa is drugged and filmed while men wearing stockings over their faces amputate her legs. She would later learn that the film was so popular it was even screened in the United States. She was finally a star, but would spend the rest of her life struggling for fame on her own terms. Mordrake’s demon face decides she is not terrible enough to take. 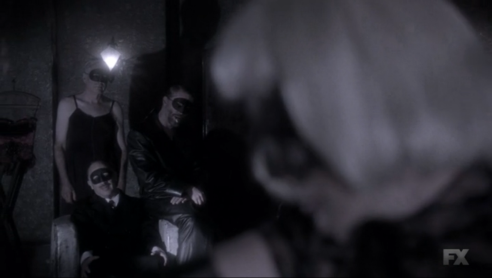 The Watchers and Elsa, activity partners.

Jimmy’s motorcycle runs out of gas while driving Maggie back to camp. The heavy ham-fist of Fate, ever ready to jam itself into our lives! Twisty’s encampment happens to be nearby, and the pretty captive from episode 1 shows the newest addition from the previous episode the ropes: “The clown makes us watch him do things… clown stuff.” She attempts an escape, but Twisty catches her out in the woods where Jimmy and Maggie happen to be hiking. Fed up with wrongdoing, Jimmy gives chase to rescue the girl, only to get both himself and Maggie caught up in the terrible showcase Twisty and Dandy have planned. Before the nutty pair can saw Maggie in half, however, she escapes with the captives, leaving Jimmy behind in Twisty’s school bus and evading Dandy in the forest. His Halloween is ruined.

Left alone, Twisty is visited by Mordrake, who was drawn to the encampment by the music from the showcase. Being that it is universal law that game recognizes game, Twisty obediently relates his own shitty story through the wet, lumpy hole where his mouth should be. Twisty pathetically claims to be a good person as he explains how he used to be a good clown who loved children, but was tricked to flee the carnival he traveled with by some carnies who were jealous of all the kids sitting in his lap. I think by now it’s obvious the show’s writers Googled every line that could be crossed and used it as a checklist for this season. Twisty returned to his hometown of Jupiter, his clown career ruined in the carny circuit. Numerous other career attempts failed, with a self-inflicted gunshot wound falling somewhere on the timeline. He feels justified in snatching an unwilling audience from their homes so that he can continue his clowning, still believing himself to be a good person. Mordrake’s demon face weeps off-screen, sad for the idiot who just told a story that wouldn’t fly even with Toastmasters. Jimmy watches all of this from inside the bus, his dick-hands no doubt sweaty in terror. Mordrake delivers a bunch of stabs to Twisty’s barrel chest. His pasty dead crew gather around to watch their newest member die into their ranks. I would imagine this is what it looks like when you’re hired at a startup these days: Older members watching your soul leave your body before they can fully accept you. Dandy finds his clown-love lifeless and alone, and carries on his legacy by wearing his despicable mouth-mask. It gives him the confidence to murder Dora, who dies talking shit to him. Halloween is over, boy. 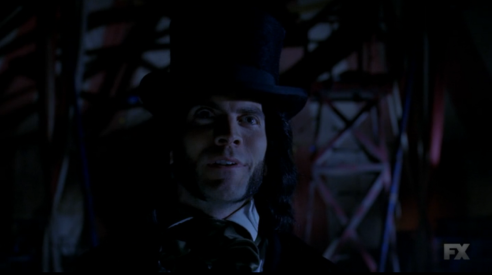 Cops question Jimmy and Maggie about Twisty’s encampment. They’re the same ones from episode 2, with whom Meep was last seen alive. Jimmy is down to fuck the police, and asks for the cop’s name so that he can name him when he tells the local paper about little Meep’s murder. Grateful Jupiter citizens arrive at the freak show camp to thank Jimmy for saving them from Twisty and the lame curfew he brought to their town. While the troupe prepares for their sold-out show that night, Dr. Mansfield arrives, introducing himself to Elsa as Richard Spencer, a talent agent who’s just blown into town from Hollywood. And why shouldn’t Elsa believe him? He’s just a guy who walks into her main stage tent and tells her he’s really important in a town that she’s only heard about.