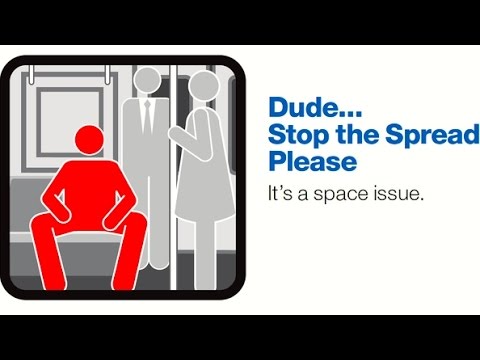 Manspreading is the term used to describe when you plop down on public transit like it’s your personal couch, spreading your knees wide enough so that your ballsack and each leg get their own seat. This most frequently happens during rush hour on a weekday when the gentleman in question is too consumed in a riveting game of Candy Crush to acknowledge the space he might be taking up among other humans on public transit.

“How do I know if I’m manspreading?”

Close your legs. Are they still entering the territory of another seat? If you answered no, you were probably just manspreading.

Yes. And they do. However the term is gendered because the percentage of women who eagle spread a seat is usually pretty slim. Often because it is also tied to the notion that women should keep their legs crossed, which produces unsightly varicose veins we must then get removed through the booming varicose vein removal industry. We just hate taking up space and being in the way!

“But women take up space with their bags, don’t they?”

Sure. Men and women alike who take up more space than actually needed are both widely regarded as assholes. Whether it’s a purse, or a man who chooses to stand on the G train while providing a chivalrous seat to his delicious chicken dinner when there are literally no other seats available. Or this guy, who is magically taking up five seats with his bicycle and legs.

“What if I’m tall? Or I have a big penis? Closing our legs is uncomfortable.”

Ever ride in an airplane? Try sitting up straight, it will bring your legs into a more comfortable sitting position than slouching. Sometimes we have to make adjustments to our level of comfort in public transit situations. It’s one of the downsides of not owning your own vehicle. I would be more comfortable, for example, if my legs were extended outwards, using another seat as an ottoman. But I don’t, because society looks down upon this behavior as shitty and self-entitled. I would also be more comfortable if I didn’t have to ram my gigantic tits inward while I curl into a fetal position during rush hour to accommodate a male rider having some room for his penis. We all make concessions.

“Why don’t you just ask them politely to close their legs?”

Many people do this, and it’s exhausting. But we wouldn’t be collectively talking about space entitlement if it wasn’t a constant, nagging issue. The idea is to discuss manspreading and change the behavior, rather than consistently reminding people they are self-entitled assholes.

“Yeah, but why don’t you just ask them to close their legs? If someone just asked me, I would do it no problem.”

A lot of women are fearful of entering this territory because it is tied to other aspects of male-entitlement spaces of sexism, such as catcalling. Manspreading isn’t always necessarily a comfort act, it can be about asserting space. Women who try to interfere are called “bitches,” “cunts,” and other aggressive gendered slurs, or will be met with elbow pushing, in a way that men don’t often experience with other men. Yes, #notallmen, but more like, #prettymuchmostmen.

“That seems a bit much. Do you have evidence of this?”

Imagine if literally everything that came out of your mouth was met with this question. And you became so annoyed that you started recording your experiences only to be met with people saying it was annoying and hostile to have their actions called out. Welcome to being a woman.

Carly Fisher worships her grandma and always has room for dessert. Her work has appeared in Food & Wine, Bon Appetit, McSweeney’s, and Gawker/Jezebel. She tweets @carlyafisher.

For more important information on manspreading, read this and this.