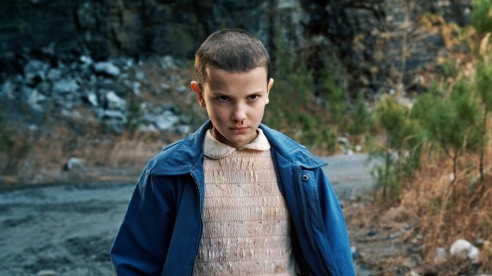 –You think you’re better than me?

–How could you dislike such a great show?

–I thought it was boring.

–How is that possible?

–Maybe you didn’t get the references… it’s basically an homage to the 1980’s work of Spielberg and John Carpenter and Stephen King.

–I like some of those things a lot. But I felt like the show was less of an homage than a sort of parade of references… like, here’s a scene from this, here’s a song from that, and then people get excited because they recognize the thing. It’s the same principle behind the jokes on Family Guy.

–You like Quentin Tarantino though, right? And that’s what he does.

–I mean, he does snag stuff from other sources, but I feel like he also runs his influences through a specific filter and has his own voice…

–Maybe you don’t have the sense of wonder to appreciate a show like this.

–There’s no wonder to it, though. It’s the same sort of dour tone for eight frankly kind of plodding hours.

–Wasn’t it cool how the female characters were so badass?

–No, the female characters were fine. But I don’t know if, for me at least, that’s enough to make the whole thing worthwhile.

–Now I’m wondering what you thought of Ghostbusters.

–This isn’t about Ghostbusters.

–One thing I will say for Stranger Things is that…

–I’m not a misogynist.

–I’m not. And the fact that you’d immediately assume I am is insulting.

–I’m not a misogynist. I like all those women. I think they’re all funny. I thought this particular film was a mess. I think there were like two good jokes in the entire thing.

–I bet you liked the Bill Murray part.

–The Bill Murray part was the worst part.

–Oh, so you’re proving you’re not a misogynist by saying you didn’t like the Bill Murray part.

–That’s not what I’m doing.

–You didn’t think it was awesome to see these strong women working together, doing science, and driving the entire story, without needing some man around?

–That a subversion of the typical thing where the male lead lusts after someone. And anyway, her arc was about healing the rift between her and Melissa McCarthy.

–They pretended that was the arc at the end, but really there was one scene of them not getting along at the beginning and then the idea that there was any strife between them was largely forgotten until the end. The characters were all awful. The only joke with Melissa McCarthy was that she repeatedly orders soup from a shitty restaurant and complains about it. Leslie Jones’ character was entirely based around the idea that she has an encyclopedic knowledge of NYC, and then at the end they figure out the villain’s plot when another character suddenly has an encyclopedic knowledge of NYC.

–I thought it was moving.

–You are, because you thought the movie was bad.

–Okay. I know lots of people that liked the movie. I’m not judging anyone.

–I thought it was bad.

–So then what you’re saying is that people who didn’t like it have bad taste. That’s insulting.

–I didn’t want to tell you because I knew you’d think I was a misogynist.

–Have you considered that you didn’t like it because you have this ingrained misogyny that’s influencing your reaction?

–Yeah, I did think about that. But ultimately I don’t think that’s why I didn’t like it. I didn’t like it because it wasn’t good. Maybe equality means being able to admit something sucks regardless of the gender politics involved.

–A lot of people–a lot of women– found it empowering.

–But you’re basically calling them fools for finding something bad empowering.

—I did kind of leave the theater thinking maybe the reason some women found it so empowering is that there’s so little for them to get excited about that they’ll take what they can get, even if it’s this. But I don’t think I should tell anyone I thought that.

–Isn’t it worth noting that I was afraid to publicly express my opinion on this piece of art because I was afraid I’d be judged?

–But if someone likes the Pokémon game, shouldn’t they have the right to defend themselves against someone who says it’s dumb?

–Absolutely. But see, you said “defend themselves.” Maybe the problem is that people are taking this stuff too… like, if you like Pokémon or Ghostbusters or whatever and someone else doesn’t like it, that’s not a judgment on your core being. Maybe the Internet has made it so easy to cultivate our cultural experiences and find our tribes that we’ve become unable to handle opinions that stray from the consensus?

–Anyway, I didn’t like Ghostbusters or Stranger Things. And I haven’t played the Pokémon game.

–I got to get going, actually.

–Where do you have to be?

–You didn’t like Stranger Things or Ghostbusters but you’re going to see the new Woody Allen movie?

–Don’t make too much of this.

–What were the two jokes you liked in Ghostbusters?

—I really got to go.

—Who made the jokes you liked?

–If it’s not important, just say what the jokes were. Were they made by Chris Hemsworth, by some chance?

—How about the other one? Don’t tell me it was Dan Akroyd…

­–It was Andy Garcia.

One Response to “I Didn’t Like Stranger Things. Ask Me Anything”