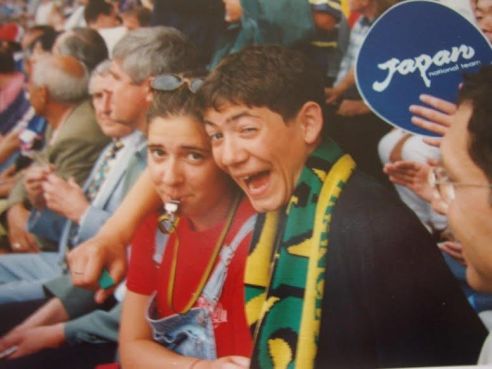 My brother and I at the Japan v Jamaica Game, Lyon 1998

There are two ways to think of life: one, that the seeds for your future are planted at various points, by the decisions you make and the things that happen to you, and when you look back you can see those through-lines vining through your story. The other way is to believe it’s all random chaos, that life is a mess that your brain tries to order with lies about the meaning of things. But whether they are real or just figments of your imagination, there are these themes to all lives. And maybe it sounds like total bullshit but for me one of those themes is the World Cup.

When I was fifteen, my parents took my brother and me out of school a week before summer vacation started and we went for a month to Europe: Norway for a week, Sweden for a week and then two weeks outside of Lyon in France for the World Cup. It was an amazing trip for the obvious reason: it was a month in Europe. We ate crazy food, saw beautiful old things, rode types of transportation we’d never ridden, watched world class international soccer games: the works. But because I was a 15-year-old girl, the trip was also about something a little different for me; it was actually about a boy.

Leaving my first boyfriend for a month, at the time, seemed overwhelmingly hard. His name was Phil* [*I’m changing his name here so I don’t get into trouble] and he had a pool table in his basement and when I thought of him the whole continent of Europe paled and became a longer, more boring version of global studies humanities class. The second we landed in Norway, probably before actually, I started writing him letters. On boats and trams and trains I wrote him long, detailed letters describing everything we were doing. Half of the pictures of me in Scandinavia, I’m scribbling something. I took pictures in photo booths and sent them to him. Postcards, long letters, whatever I could I sent to Phil.

I had given him a list of the addresses where I would be. In my mind at every new location a letter would be waiting for me from Phil, telling me about the things he was doing (playing pool, swimming in a river) and how much he was missing me. The thing I didn’t know at the time is there is a big difference between the communication needs of a 15-year-old-girl and those of a 16-year-old boy. Now I can add that there is a big difference between my communication needs and those of any boy or girl, maybe ever, but at the time I had no idea how outrageous my expectations were. So at every new hotel I was supremely disappointed when there was no mail with my name on it. This was before everyone had cellphones, before Facebook, in 1998, so while I did buy a calling card and call him once, the huge amount of land and water between us was very real.

My anguish lasted through Norway and Sweden and then we hit France. My parents let me taste wine and we played soccer with boys from the village and one named Jean Baptiste was so cute and friendly that I suddenly stopped thinking about Phil completely. We went to soccer games with the friends we were staying with–we saw France, the future winners, play, and danced the Macerena with what was apparently a large number of terrorists at the US/Iran game. When a letter finally arrived from Phil, close to the end of the trip, I found it creepy, oddly sexual and pretty boring and poorly written. When the month was up and we finally came back to Oregon, I broke up with Phil in his epically cool basement.

Every four years since then, the World Cup has become a touchstone for major romantic implosions in my life. In the summer of 2002 when Brazil won, I was a college drop-out, living at home, working as a lifeguard, beginning the denial phase, for the fifth or sixtieth but definitely final time, of being broken up with my real high school sweetheart. In 2006, when Italy became the number one team in the world, I watched the games with my alcoholic kind-of-boyfriend–getting up early to drink IPA and smoke cigarettes and slowly realizing that I actually didn’t like the guy at all. Maybe I related too closely with Zidane. Two months later, I moved to San Francisco.

In 2010, the World Cup was punctuated, for me, by a trip to Big Sur with my most serious ever boyfriend. We’d been living together for two years and this trip was our breaking-up trip–it was planned that way and had been planned that way for a couple months. We’d go on this trip and then he’d move out and it would be over. We drove down the coast from San Francisco, camping, swimming in rivers, screaming at each other, sitting in hot springs, sobbing and stopping at bars to watch soccer games. When the trip was over and he finally moved the last of his stuff out of the apartment while I was at work and then drove to Wisconsin, I watched games alone at bars and felt every single loss was directed at me. I watched Spain win on my computer in my bed, curled in the fetal position. It felt like the whole world had lost.

Maybe four years is just the right amount of time for these things to percolate, I don’t know, but as the World Cup geared up this year, I began to worry, even tough I am currently strikingly single: first, HOLY SHIT WHAT AWFUL THING WAS GOING TO HAPPEN and then, almost worse, what if nothing happened? Because the thing about these stories is: I do believe they are just stories I tell myself, conclusions I draw out of the random muck of things that happen, but on the other hand, completely impossibly, I totally believe in them and like any good adherent to a faith (mine being the Church of World Cup Romantics), I live or die by signs. So, when I got a text from a very tangly romantic person that I hadn’t seen in almost two years, a week or so into the tournament, I wasn’t exactly surprised.

Because what happened next, you know, just happened and is basically still happening, that story lives deep in the classified folder. But in four years when I dredge this out again, it will be interesting to see where the whole thing landed (email me in four years and I will definitely tell you too). Suffice to say that during this World Cup, I’ve watched each game closely, looking for meaning in the fact that every team I root for loses, trying not to take too personally the defeat of teams I attach unhealthy meaning to, like the US, Mexico and Ghana.

However, after yesterday’s victory by the evil Germans (my least favorite of all the teams), because I want there to be some glimmer of hope in my outlook on the world, I’m working on a new theory: maybe the World Cup is less of a harbinger of doom than it is a time capsule. Because it’s a world event and it goes on for such a long time, the things in my life happening during these weeks take on a glow that I can remember. And four years is long enough to change, to grow up in certain ways, to discover new mistakes to make. And then there is the narrative arc of each tournament. The good guys and bad guys and intense feelings of happiness and sadness over each game, each round, create a simple storyline that helps me simplify MY story line. As the romances get more complicated through the years, the good and bad guys become more difficult to define, viewing them through the lens of a soccer match makes them digestible and understandable, even though deep down I know that all love is complicated, a mix of dark and light that is circular and doesn’t have an end point and a beginning point. There are no PK shootouts. There is no trophy.

In 2018 I will be 35. Maybe that will be the year the US takes the whole thing, in a US v Mexico final. Maybe it will be the year I fall in love with the right person or come to enough peace with myself that I stop needing to come up with stories to explain why I’m not super great at relationships. Whatever happens though, unless FIFA cancels the whole thing or the electricity runs out, it’s pretty much guaranteed that I’ll be tuning in, trying to discover some secret hidden meaning behind everything going down in Russia.