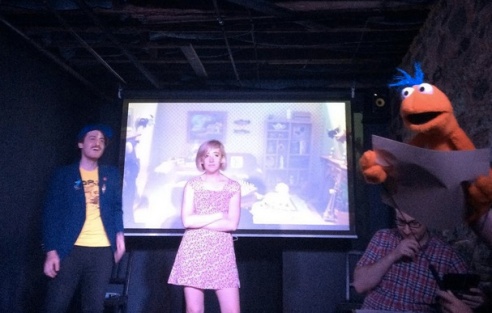 A month ago I went to a comedy show called Cartoon Monsoon. I’ve been back every week since, and the show has added a considerable measure of joy to my life.

Mary Houlihan and Joe Rumrill host the show, which they describe in its Facebook event as “a love letter to beloved shows like Pee Wee’s Playhouse and Lamb Chop’s Play-Along.” In each installment they introduce kooky guest characters played by local comedians and play beautiful cartoons on a projector. These segments break up the episode’s larger storyline, in which Houlihan and Rumrill go on some kind of an absurd adventure that usually involves them arguing with a puppet, named Puppet and voiced by Tim Platt.

Houlihan’s and Rumrill’s characters project a completely innocent and naive worldview, while the cartoons and character bits tend to go darker, and Platt’s voice on the show lends a particular kind of poetic, cosmic darkness that only makes everything funnier. It’s not a straightforward homage to kid’s shows of the past, but it’s not an edgy send-up, either– it’s some kind of perfect balance between the two.

The final show (for now) is tomorrow night at the Annoyance Theater in Williamsburg, Brooklyn. If you live in the tri-state area, or on the East Coast and can crash with someone, or you’re super-rich and have a private jet and can just go anywhere at any time, I strongly urge you to go. Here are Houlihan and Rumrill answering some interview questions:

THE TUSK: Will there be more Cartoon Monsoon?

MARY HOULIHAN: Yes! Joe suggested doing a monthly show (the Annoyance run was weekly), so we could put more effort into each episode and make the props crazier and cram in more jokes. Maybe convince some big stars to drop in, like Bradley Cooper, or Lamb Chop. My big pie in the sky dream is to have it be a TV show, and we’ve been talking about ways we could see that happening. I had imagined it could be filmed three-camera style in front of a live studio audience. Tim Platt, who operates Puppet and also wrote 2 episodes for this past run, had the idea to film it like “Louie,” which I think would be really funny.

JOE RUMRILL: Absolutely, there will be more Monsoons a-coming. Doing this show has been some of the most fun I’ve had doing comedy and I want to keep it going, for sure! Most likely as a monthly that’ll be BIGGER and MORE IMPRESSIVE and MORE COSTUMES and FEATHERS FLYIN’. The gang’s figuring it out AS WE SPEAK.

T: What comprises the process of making the show– acquiring cartoons, booking people to do bits, planning the episode’s structure? How much time and effort does it take each week? What compelled you to do the show in the first place? Have you ever had a visual or otherwise high-concept gag end up being way more trouble than it was worth/ not work/ take up too much time to get right? Any other snags that you’ve hit putting the show together?

MH: We take turns writing episodes. So the structure that worked for us was that when it was your week to write an episode, you would write a 10-15 page script, about the adventure that Mary, Joe, and Puppet go on. Throughout the script, there are spaces for 3 guest bits, and 3 cartoons. For the guest bits, the mailman will come over, or the doorbell will ring and a friend stops by, something like that that rests the A-story. We tell the guests what the show is like if they haven’t seen it before, and to basically go nuts and do whatever character they want and we’ll finagle a way to justify it into the arc.
The cartoons came from friends and friends of friends, basically from putting out a call on Facebook and Twitter. My friend Birgit Rathsmann, who teaches at NYU, sent out a blurb to their animation department email list and we got a lot of great submissions from that.
Me and Joe had been friends for a while from going to open mics, and we had really similar tastes, including classic animation. We had talked about how it would be cool to have a show that had something to do with animation, even if it was just us giving commentary about old shorts that we liked. I submitted a very half-baked pitch called “The Cartoon Show with Mary and Joe” to Philadelphia Five Dollar Comedy Week, and it got accepted. We figured if we were already driving to Philly, we ought to bring a bunch of our friends to perform at this festival, too, so we ended up writing a big ensemble piece, and getting animators from Philly to submit cartoons that kind of acted like commercial breaks. I saw Tim Platt do a bit with his puppet, Puppet, at an alternative open mic called No Jokes Allowed, and it was very obvious that he/they needed to be included.
One thing we didn’t get to that I want to do eventually is have an episode where me and Joe get into a huge fight, and find new best friends, that are just weird versions of us.

We also really want to explore their relationships and backstories more, and talked about having a “will-they-won’t-they?” with Mary and Puppet.

We send a script out to everyone involved by Monday or Tuesday, then meet up on Thursday to read, then kinda go nuts and cram on Friday before the show. It can be stressful to feel like you’re gonna forget your lines or your cues, but we’ve found that when those things happen, the best thing to do is just have fun and go with it because something funny always comes out of that chaos.

JR: a. I think the fact that it’s new and WEEKLY makes it a bit more work than other shows I’ve worked on. Mary typically picks the cartoons, we share guest and supporting cast booking duties, Mary and I take turns writing the ‘sodes, along with Tim Platt who performs Puppet. And then everybody riffs it out up there, night of.

b. Mary and I bonded pretty early on over our mutual appreciation of certain comedy stuff, the biggest being our interest in animation from the golden-age straight on up to the stuff that was on when we were kids. So we wanted to work on something that showcased original animation, along with live comedy. And that morphed into Cartoon Monsoon!
c. Hmmm, i’s a pretty tech-heavy show, so we’re always really relieved when things go right! But as far as things not going quite as planned – there was a gag with a real frozen lasagna that I really pictured going better when I wrote it. It was supposed to be a big reveal, and then it sorta fell flat and then we had to clean cheese and sauce off the floors after. Oh, and in the same episode, there was this scene where we were all supposed to be in different places writing each other letters that are narrated in voiceover – oof, see it’s confusing even to explain!
d. The only snag I’m consistently hitting with this show is: my suit jacket’s beginning to smell BAD.
T: What’s been the most rewarding thing about doing the show? What’s been your favorite joke or bit yet, either that you guys have done or a guest has done?

MH: Ugh that’s such a tough question!!! All the guests have been so very amazing that it’s hard to pick just one. Well I loved the episode where my friend’s band The Yellow Dress came. They were on tour and happened to be in New York on a Friday so we wrote them into the episode, like one of those old Scooby-Doo specials where a celebrity guest comes. The Yellow Dress played a couple songs for the “Rock N’ Roll Telethon For The Cure,” to cure Mary and Joe’s phony diseases. Nate Fernald did a bit where he was a sexy stripper cop who interrupted the big concert because of a noise complaint. Their music fit so great into the universe and I was so happy to have them, and I loved that Nate’s bit fit into the story so well.

JR: The most rewarding thing, for sure, is just GETTING to live out the ambition of doing our own Pee-Wee’s Playhouse style show. Not many people get a chance to do that! Getting to work so closely with Mary, Tim and Steve Desiena who does the all the great music and all the amazing actors has been a TOTAL dream come true! But also getting yelled at by a puppet on a weekly basis is up there, too. Every guest we’ve had on has been absolutely amazing, they’ve really been fantastic about coming up with bits that work within the show’s universe. I defy anyone to pick a favorite. Personally, anytime Tim (the character) reveals a weird detail about the relationship between him and Puppet to Mary & Joe is a personal highlight for me.

JR: An actual hippopotamus. Like, just calmly exploring the space.

T: Anything else you wanna talk about / plug?

MH: Come see Cartoon Monsoon this Friday, and again when we turn it into a monthly show. Also I’m doing a one-woman show, which will be a mix of stand-up and characters, in September at Union Hall. I am still deciding the name, but I think it will either be “Live N’ Good” or “Greatest Hits (1972-1980).”

JR: Yes, I’d like to plug that there will be a Cartoon Monsoon float in this year’s Macy’s Thanksgiving Day Parade. It’s not true yet, but if enough buzz gets generated, maybe we can just trick ’em into thinking they booked us! Also: look up the song “Vanz Kant Danz” and consider: this was the guy who wrote “Fortunate Son”!