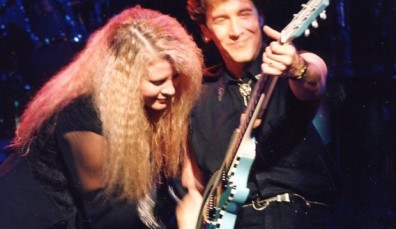 The Peter Green Years. The Bob Welch Years. The Buckingham-Nicks-McVie Years… The Rick Vito Years. I’m willing to venture only so far into that Heart of Darkness, that terrifying vortex the band was sucked into after Lindsey left in the summer of 1987. Sure, his replacements Rick Vito and Billy Burnette are accomplished guitarists, but there was no way the chemistry of the band’s past 12 years could have been replicated. 1990’s Behind the Mask featuring this new lineup is probably the worst album ever released under the Fleetwood Mac name. Lindsey’s absence only confirmed that he was the Man Behind the Curtain.

“Isn’t it Midnight” was the final single released from Tango in the Night and the first after Lindsey’s exit. The lyrics are vague to point of sounding vapid, but it’s ultimately saved by top notch production and a strong hook. By the time the Mac’s Tango in the Night Tour was captured on film, they were in Full Vito Mode. If you were to just hear the audio from the footage of “Isn’t it Midnight” you wouldn’t necessarily be able to notice a glaring difference between the studio version and the performance, but the visuals say everything. The hair, the hair, the hair, the Reagan-Thatcher era decadence. It would take Bill Clinton to bring Lindsey back in 1993. When Hillary is president maybe she can erase the Vito Years.

Evan Hume is a Marxist Ufologist and Professorial Lecturer of Fine Art living in Richmond, VA. He has a cat named Bruce Springsteen, a subscription to Artforum, and several pending FOIA requests.