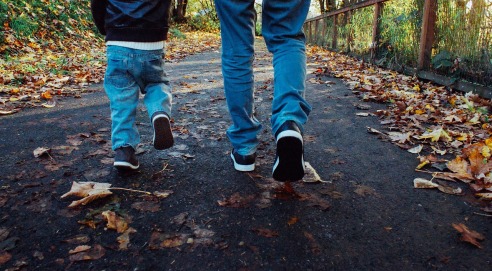 Was that your girlfriend, Code? She’s cute.

Ha. Don’t listen to me, kid. I don’t even know if y’all do girlfriend/boyfriend anymore.

Your mom, Cody—she was a wildcat when we met. Now she’s a slightly older wildcat.

Naw. She wasn’t a literal cat. Jeez, Cody. Don’t they teach idioms in that school?

No, Cody. I’m not calling you an idiot. It’s just a term to mean the meaning isn’t obvious by literal interpretation of the words… Aw hell. You’re pulling my leg, aren’t you, you little son of a bitch? Touché, Cody. Touché.

Know what, Cody—hows about both of us ditch our homework tonight and check out this new game I got for your Xbox One.

Shit. I’m sorry, Codester—you don’t have an Xbox One, do you?

When I was your age I begged my old man for an NES. Damn thing only cost a hundred and twenty bucks, but you’d’ve thought it cost a million. Hard being a kid, I guess.

Anyway, C-man, you have an XBox One, now. Hope it’s cool I went with this limited Master Chief edition. Looks pretty garish if you ask me, but the kid at the counter seemed pretty confident I could play Asteroids on it if I poked around enough.

Hey, Cody. What would you say if I told you I was getting a cool new bachelor pad? You and me can play Rocket League on the weekends, maybe.

No, Cody. No matter what, your mom and I both love you, and each other, very much. We just need different things now. We were babies when we got hitched.

Sure. When you put it like that, Cody. Yeah, being parents so young didn’t help. Life’s a weird thing though. No getting around it. We tried. We tried hard. Too hard probably. They don’t tell you how little trying counts in the end. Very little is how much. It’s either on or it’s not, and for your mom and me it hasn’t been on for a long time.

Ok, Cody. Take all the time to yourself you need. I’ll order us a pizza and you can graze at your leisure.