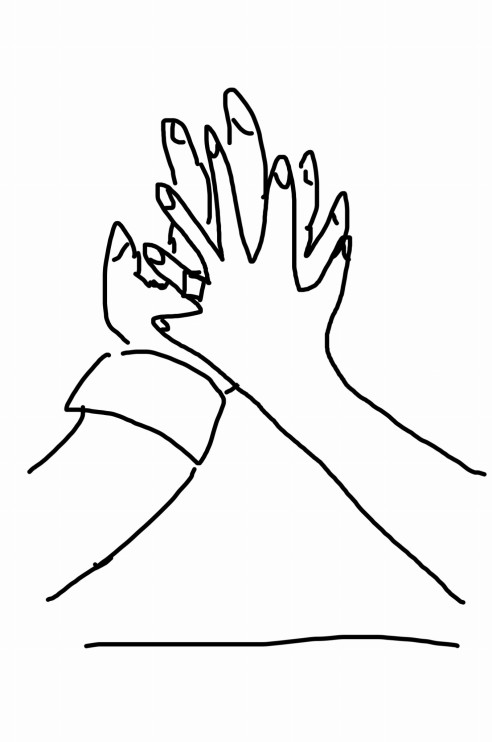 All my friends are doing the trendy open-relationship thing. One is even in an open marriage. The newlyweds have puffy, blue couches where they welcome strangers to sleep over. The couches remind me of bruised, tired eyes, but they are comfy. They’re both bisexual so they prowl and attack together. Rarely they hear complaints. Most of my friends haven’t taken it so far, and they still swear that they’ll settle down when they’re married. It’s funny to watch people squirm over their emotions, confessing their need for extracurricular love like it’s the darkest sin of this bloody, soiled earth. Still, I don’t get it. Everyone’s asking for permission to sleep around, everyone is being so – what’s the word? – honest. Where’s the fun in that? Cheating is so thrilling because it’s cheating.

I’ve had many one-night stands. I like them. There’s something magical about a one-night stand. It’s like a wedding, but a hell of a lot cheaper. There’s all that hope and excitement and love in one place, usually in one room. Or, for the youngsters out there, I suppose it’s like clubbing. You know, dancing. The lights are pulsing. Hell, the whole place smells sweaty. It’s a collection of voices, and you can try but you won’t hear one single voice even when you strain, even when they’re screaming at you. The music throbs, which makes it seem like the walls are throbbing, and the floor tilts because everyone’s been drinking and smoking and trying new things in the tiny bathrooms. But everyone believes that this night means something, that they’re in the middle of something big and great. Yeah, they’re a part of something, and they ride it out, this night, straddling and holding on tight.

And so I’ve had many lovers. I use the word “lovers” because I believe there was always love there, somewhere, if only for one sweaty moment. I didn’t tell them about the others, just about me. I talked and talked so I had a better idea of who I was. My relations then were never about the other person at all. Just me. Anyway, they didn’t have to say a word, though you can be sure they always tried, slipping in something about themselves edgewise. But then I told them all that I was hungry, hungry like a hound, and I ripped off my shirt, said I was an animal, a dirty mammal with heat coursing through me, and then, finally, they just sat back, nodding.

The key is to choose a common name. Consult a book of popular boy names from the ‘90s and 2000s. Oh, don’t get me wrong, I like a good Jerome as much as the next gal, but how many Jeromes do you really know? When it comes to cheating well, keep it simple: John, Matt, Nick, Mike, Chris, maybe Josh. When I met my first Matt, I shook his hand firmly and smiled into his eyes. “Nice name,” I said and then I collected two more. They were dispersed nicely: Matt at school, Matt at work, Matt who lived in the next town. Matt C. was my favorite. We drank excessively together, called ourselves artists. I had just gotten a camera the Christmas before, a nice Canon that I was afraid to break, and he read everything by Hemingway and spoke in short witticisms, quoting For Whom the Bell Tolls and The Sun Also Rises in the same sentences. It would have been unbearable without all the booze.

When Matt C., from school, wanted to visit me at work, I told Matt J. he should call out of work, play hooky, do something fun for once. Over the phone, I couldn’t tell how he was reacting until he said, after a long pause, “Okay!” Poor, stupid Matt J. He might have been the cutest: sun-bleached hair, always stinking like sea-salt, Corona-burps, black bare feet unless he was at work. His living room had only a short- and long-board in it, some wax on the coffee table, sand in all the tile cracks. He was an enthusiastic lover. After sex, he always said that he was the luckiest man on the whole beach.

So, Matt C. was at a high-top table near the window and I made my rounds then came over to him. He put his arm around me and kissed my forehead.

I heard Matt J.’s loud laugh behind me. Sure enough, he was at the host stand, flirting with the too-young hostess who was too hot for him. He saw me, gave me one of those crazy waves you only see at airports. He said a last word to the hostess and made his way to the high-top table.

“Hey, man!” Matt J. said, putting out his hand. I backed away from them both, chewing my nails. The restaurant’s pet parrot squawked behind me. “Uh oh,” he said. “Uh oh. Bad.” I glared at the parrot.

“No shit!” Matt J. looked at me too, laughing harder.

They shook their heads, exchanging what-are-the-chances and uncomfortable laughs. “So, you two work together or something?” Matt C. asked, relaxing his shoulders.

“Or something!” Matt J. winked at me then he leaned and whispered to Matt C.: “Honestly, I think I’m falling in love with the girl.”

Matt C. nearly fell off his stool. He stood, clumsy, shaking with anger. “Who the hell do you think you are, talking about my girl like that? Don’t be disrespectin’ her, man! Not in front of me.”

“Your girl?” Matt J. was laughing too much. His body began shaking with his laughter. “Your girl?” He inched away from the both of us, back to the door.

They both turned, such desperation and confusion in their eyes. They waited for me to say something more.

A guy at one of my tables lifted his empty pitcher of Yuengling and slammed it on the table. I held up my pointer finger to him.

“Cracker,” the parrot said behind me. “Cracker, cracker, please.”

I shrugged, put my head down. I know I should have apologized, but I couldn’t. I wasn’t sorry. I had enjoyed it. I loved it. They must’ve known, on some level. All those nights I was unavailable to the other Matt. I called my meetings with the other Matts dates, and they didn’t question it. They assumed I was going out with my girlfriends or something; they told me to have fun, sending me off with a kiss.

Next, I tried three Nicks, which lasted longer because I was more prepared and seasoned from the Matts. One Nick was a study-abroad student from London. When he went back to England, we did the sad airport thing and talked and masturbated on Skype. I guess you could say we tried the long-distance relationship but, as always, it wasn’t enough. London Nick with his accent and abs needed a worthy replacement. I had transferred to the university in Tampa and moved out of the smoldering, no AC apartment to live in the dorms. I stepped into my flipflops like they were slippers and set out to walk the campus. Night had fallen, but the air was still humid and the breezes felt like blasts of warm air from a car heater. Bright bulb lights shone over the long soccer field. I walked near the net, stood behind the chalked line in the thick grass. There wasn’t a coach, but the teams were divided by red and yellow net shirts over their black shirts and shorts. The players yelled at each other, calling out foreign plays, cursing at teammates. Girls played too. I had a strange pull to go for a run, to be more athletic, but that passed fast. I jogged sometimes, but I was more of a walker than anything, and so far, I was lucky and proportioned. Must be all that sex. I should make commercials for healthy sex lives, milk-mustached with bed head.

One of the players, a tall guy with a goofy ‘fro of hair, came running toward me, well, the goal. It was like at a concert, how you would swear that the singer most definitely looks at you while singing the refrain. I smiled at him. He didn’t smile back. His mouth was open as he ran, juggling the ball back and forth easily. His left leg went back then his left foot came forward, fast, connecting with the ball and sending it flying into the air. It seemed to be coming straight for me, but I was right near the goal, after all. The ball spun straight ahead, and then I knew I had been right. It was coming for me. I was frozen, watching the ball zoom closer to me. I put my hands out and caught it just as it hit my stomach. I gasped. It momentarily took my breath from me and I thought I might choke, but I just stood there, the ball in my hands against my stomach, mouth open, trying to catch my breath. I looked across the field. Now he smiled.

Meet Nate. Starts with N, four letters long. Close enough to Nick. Anyway, it didn’t matter. His name could’ve been Randall and I still would’ve liked him. Liked him so much I was willing to bend my rules for him. Nate was Australian so he filled the accent quota gap. The team was such a community, and I’ll admit that I had fun at the games with the other girlfriends. Nate was safe because we were either in my dorm room, his dorm room, or campus. If we went out for dinner, we ate on campus. But even with two Nicks and a Nate, I wasn’t happy. I was satisfied most days, content some days, but never happy. I needed more, and I was starting to see that adding another Nick wasn’t the answer.

Kacy Cunningham just finished the first draft of her first novel. When she’s not writing, she’s cornering the market on being a basic betch.

One Response to “How to Cheat Well”