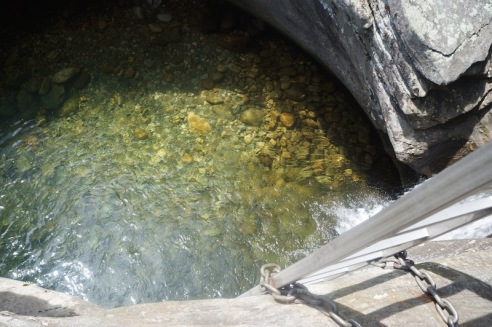 Out the passenger window and around a bend, she sees people get out of a black SUV and walk into the woods.

–Should we park there?

He doesn’t answer, drives them further, up a slope, parks at a dead end, turns the motor off, opens his door.

She futzes with their stuff. What should they take? Cheese. Beer. Towels. Bathing suits. Everything.

He takes her picture by the car. She wears her pink-purple shorts and movie star sunglasses, is dappled by the shade and light of summer sun through thousands of leaves.

She follows him into the woods: a narrow path soft with dirt, the sounds of water. Small rocks on the path, then larger ones off of it.

The water is close now. They see the ladder they had seen in the picture online going far down a large circular hole in the boulders.  A daunting sign warns that twelve people have lost their lives here. She wonders if they are going to swim despite the odds, then reads on: the ladder isn’t to be used for swimming but for emergency purposes.

She and he peer into the hole. Deep water down, down there. Water falling in on one side and out on the other, and down the slope, the falls. He climbs up to a high spot, looks down to where it goes. She spots a shoe on the ground. A black sneaker. Brittle, as if it had been soaked then dried out.

–Creepy, she says, showing him.

They walk down the steep trail, following the gigantic rocks cut through with water.

–There are people down there, those people we saw getting out of their car. They look like tourists.

She can’t see them since she is having trouble with her shoes on the steep trail, slick with brown powdery dirt and sinewy tree roots. She squats down and slides herself down it, feels sure of her center of gravity down here. He looks back to see if she is ok.

She is concentrating on not falling.

There are seven people at the bottom. First of all those four tourists–two men and two women who speak a strange language, look too dressed up for this. They squat gingerly on some rocks, peer up at the waterfall. It’s glorious from this angle and ends in a pair of shimmering pools. Close to the water, there are two young women–girls–wearing athletic gear taking selfies. He points out one has a shirt on that says “Dylan Panthers.” A few feet away, a woman with short silver hair smiles at the girls contentedly.

She spots the other shoe that pairs with the first she’d found at the top of the falls.

–I already saw it.

A shiver runs through her.

He puts the bag down and the two of them hang back, sit on some rocks up a bank. She takes photos of him–a small body with the tall, mossy, sunlit trees towering behind and above it.

Together, the couple watches the others.

They debate about the tag line from that show with the Dylan Panthers, about the football team. He says, “Clear eyes, full hearts, can’t lose.” She isn’t convinced. What language were those tourists speaking? Something Eastern European.

How long would the tourists sit? How many photos could the girls take? She wants to swim. She edges up to the water, puts a hand in.

He comes up behind her, and she takes her swim top from their bag they leave on the shore. The water shines invitingly, and they make their way out where a large boulder juts out between the two lower pools.

Balancing on the boulder, she slips on the top under her t-shirt in the surreptitious way women deal with bras and shirts, then takes off her t-shirt.

Miraculously, they are in the only spot of direct sun down here. They are lit up and center stage. She only looks at him, the water. Tiny colored flecks float on the surface in pink, yellow, orange, green, blue–like confetti, a froth of bubbles where the falling water hits the pool.

They dare each other to go in.

She holds her nose and slips her body off the rock, so it feels like an accident.

Cold, like that, is stunning. Her feet hit the soft sand under the water and up she goes, out again the air just feels so warm on her skin. She smiles, screams, looks up at him, bounces around. Are the people watching? She can only see the girls. She feels so happy, full of the rush of what she has done. Not really heroic, but somehow extreme.

She wades in the water for a few seconds. It is shallow, the rocks under her feet now feel like nothing under the icy cold. She hoists herself back up on the rock and into the sun with him. He is eager for the people to leave. She glances towards them and she feels bad to be blocking their view up the falls.

He takes a turn in the water too. She loves watching him come out of it, his face free, fresh.

The tourists continue to sit and chat quietly. The girls and the woman walk up the trail that they had come down, disappearing into the trees. The couple lies down in the sun and close their eyes. Her head on the soft skin of his stomach, listening to the gurgles inside him. Soon, he is up and looking:

When before there was so much hesitation about getting in the water, now he slips off his trunks in a blink of an eye, the shaft of sunlight bright on his whole body, every part of him consumed by the light so he is one shining thing.

She does, but she doesn’t say anything. He lies down again and looks at her.

He closes his eyes. Hesitant but excited, she undoes the straps on her top, lets it fall open. His eyes flash on her newly bared skin, then fix on her face. She can’t look but she knows the big, big world is beyond them: the rest of the waterfall, the trees, the road, their car, and everything. He reaches up and pulls her top off and slings it behind them. She wants to take the bottom off too, wants to touch him, but he lies down and she puts her head on his stomach again.

The light falls onto them, recharges them. A moment of quiet peace without thoughts. The sounds of water and trees.

How the moment ends:

At one point he is up again, can hear things she can’t hear.

So quick, again, he grabs her top and tosses it to her, pulls his trunks back on. She fumbles.

–They are turning away to give us a minute.

She has been caught, finally fixes her top, can’t look, lies back down, then looks. There are four hikers? Five? They wear gear–the right kinds of pants and waist packs and little hats and walking poles with neon ends. Unlike the ones before, these tourists dressed exactly for the task at hand.

The pair look down at their clothed selves–his trunks on inside out, her twisted bikini strap. On their rock they sit, talk, shift, nap, close their eyes to soak in their ray of light. All while she shoots glances at the others, fights the feeling of wishing they should go away, that they are ruining the hikers’ chance for a good picture of the beautiful sight. He is up again, goes and gets the satchel full of beer and cheese, wades across the small pool with it on his back. They talk about eating, drinking, but don’t.

–Maybe we should go?

–Maybe we should meditate for a while.

She closes her eyes, sees words floating in and out of each other, like the confetti on the surface of the water. She thinks about her family and about the people on the rocks. Some are eating sandwiches in the dark, some are hiking to the upper falls. She drifts and then wakes herself. She is hungry, wakes him. The people are still here.

He says he was dreaming an amazing dream, about animals. She doesn’t want to know, says they have a river to go to, a bank where it will be easier to have a picnic. She gets up, puts on her tank top, takes her turn with the satchel. It is heavy. She stands. He is still lying down. She balances, takes a step onto a slick rock. He is still getting up.

Sudden, harsh, her whole body slams against the centuries-old surfaces of the water-carved rock. She falls so quickly, in the blink of an eye, but the feeling stretches itself out: the force that pulls all of her and the bag into the small pool. The shock of cold. Not exhilarating now but something else. Her knees in the pebbles, she is weighed down by the bottles and food. She keeps trying to get up but keeps falling into the water.

She reaches for him. He reaches for her. She keeps falling back. Soon, he is with her in the cold water, lifting her up from below. Soon, they are both standing knee deep in the shallow water and the dripping bag is on the rock where they had napped.

–The bag! The stuff.

He puts his arms around her. A shudder of tears travels through her, shakes her.

She is wet and also she cries.

–Everything is so hard.

He pulls her close again. She breathes. Immense relief.

[She means this about the bag but why? The bag doesn’t matter. The beer and cheese are fine. They will eat them by the river in between swimming in the calm water there, where the current alternates cold and warm, where local people will swim contentedly around them and explore the pebbled banks and watch the water and sky. She will take pictures of the short and beautiful trees, round like aliens. Will take more pictures of him, his torso stretched across the towel, his hat covering his face. The sky will be deep blue with perfect clouds].

–For what? I’m just glad you aren’t hurt.

One moment he is holding her and then both of them are looking to the emptied shore. The other people left without a word.

At night, he kisses her small scrapes, calls her his bruised fruit, kneads her tender flesh.

One Response to “Tourists”