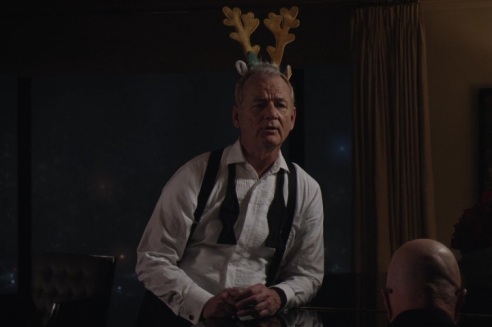 One afternoon I ran into the Arby’s around the corner from my office for a quick lunch and Bill Murray was manning the cash register. He asked for my order but I was sure it was part of some prank show or something, I kept asking him what he was doing there and looking around for the cameras. I guess after a few minutes he got frustrated with me and snapped, “Lady, you want a combo or what?” and his manager heard him, came over and told him she needed to talk to him in the office. They were back there for a while, I finished my meal and left and they were still in there and I haven’t seen him in that Arby’s since. I hope I didn’t get him fired.

My ex-boyfriend was about to board a flight to Beijing and I was desperate to get to the airport and beg him to stay and give our relationship another shot. I spot a cab and wave it down and as I’m about to get in, Bill Murray slides right by me and nabs it. But I wouldn’t let the cab leave. I’m begging Bill to give me the cab and trying to explain the situation and finally he goes, “If you can answer a riddle I’ll give you the car, but if I stump you, you wait for the next one. Deal?”

Well, I’ve always been good at riddles but I’m also in a rush, so I’m not sure what to do—I don’t know if I’ll be able to grab another cab faster than I’ll be able to answer the riddle. So I say to Bill Murray, “Only if it’s a short riddle, this is an emergency.”

Bill Murray agrees, and then he furrows his brow and starts looking around like he’s in deep concentration. He goes, “Okay, I think the best way is to start at the end and work backwards… like, take the word ‘highway’ and think of different associations and ways of saying the word and letting that form the rest.”

He didn’t even have a riddle ready! The love of my life is boarding a plane and Bill Murray is playing some crazy game! I broke down crying and Bill Murray says, “Okay, how about you tell me a riddle instead, and if it’s a stumper I’ll give you the cab and even pay for your ride?” and I fired back “Why are you doing this to me?”

Bill Murray rolls his eyes and says, “Easy, because I don’t think Tony is right for you.”

Tony is my ex-boyfriend’s name.

I asked Bill Murray how he knew Tony, because there’s no way he could know him, but all he says is “That was a terrible riddle,” and slams the door, and the cab peels off.

In 2013 I adopted a pit bull named Sam from the SPCA. Sam was sweet, but prone to melancholy, and I could never figure out why. I mean, I gave him treats, a nice bed, plenty of toys, we went to the park almost every day…

One morning at the park this beautiful woman came over and was fawning all over him, making such a big deal, and she gave him a big wet kiss on the tip of his nose and as soon as she did there was this flash of bright light and when it faded Sam was gone, replaced by Bill Murray. He looks at me and goes, “Never cheat on a witch with her sister,” then asks the woman if she wants to go get a drink. They walk off arm in arm and right as they round the corner Bill turns back to me and goes, “I threw up under the armoire in the dining room, I’ll send a check to cover the carpet cleaning.”

I’m still waiting for that check.

A few months ago I was in this shoe store hunting for a super rare sneaker, and I’m going up and down the aisles looking when suddenly Bill Murray pops out from nowhere and is like, “Hey, if you meet me in a dream it counts as really meeting me in real life!” I was like, “But I’m meeting you in real life right now,” but then it struck me that I might be dreaming, that I was actually asleep and not meeting Bill Murray. But then I didn’t wake up, which means it either wasn’t a dream or this still is one.

One day I put a quail egg I bought at the market in my parakeet Ruth’s cage to see what would happen. Ruth loved it, treated it like her own and sat on it to keep it warm, which was actually a little sad since the egg was never going to hatch, right? But then a week later I wake up in the middle of the night to Ruth screaming, and when I go to check on her the egg has hatched, there’s this quail chick in the cage holding a little slip of paper, like a fortune cookie fortune, in its beak. So I get the slip of paper away from the chick and it has “look behind you” written on it. I turn around and sitting at my kitchen table is Brian Doyle-Murray. Like an idiot the first thing out of my mouth is “Where’s Bill?” and Brian’s face just sank—he looked so, so upset. I tried to make it up to him by asking questions about Caddyshack but the damage was done, he slunk outside and got in the backseat of this Cadillac waiting by the curb. The car sat there for a minute and then the driver’s door opened and Bill Murray hopped out, fuming mad, yelling “Hell of a way to treat a guy on his birthday!” I tried to apologize but he wouldn’t listen, he got back in the car and peeled off down the street. When I went back into the house, Ruth had eaten the quail chick.