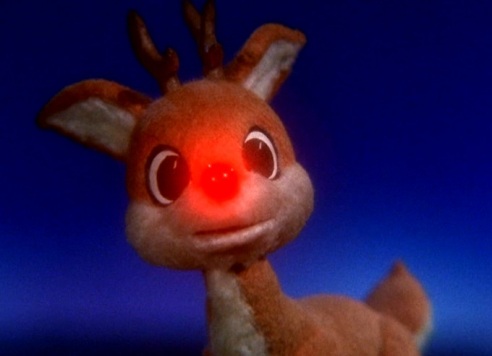 Hey, everyone. I’m Garrett. You probably know me as Garrett the Regular Reindeer. That’s okay, I know that’s what people call me. It’s fine. I’m Rudy’s brother. I’m regular, he’s “the most famous reindeer of all,” right? Rudolph, the world famous diversity hire.

I’m kidding. Rudy’s my little brother, I have to kid him sometimes. That’s a big brother’s job. You can’t stop me, Rudy! There’s something you can’t take away from me, right? I came first!

Good to see so many familiar faces in the crowd tonight. Prancer is here. Prancer, how long has it been? Forever, right? Crazy. You look great, though. I mean it. Oh, look at this. She doesn’t want to talk to me. That’s fine. Prancer, it’s fine. Probably brings up all kinds of memories, seeing me. That time in the Candy Cane forest, remember that? When we thought the goblins were chasing us? You must remember that. I bet you remember using my heart like a salt lick and then throwing it in the fucking garbage, though, right? I remember that, I remember that every Claus-damned day. That handsome buck sitting next to you—is that your husband? Prancer, hey, I had no idea. Congratulations. Sir, congratulations to you, as well. Let me ask you, real quick—what’s it like trying to sleep at night beside the coldest thing in the North Pole?

I’m playing around. This is supposed to be fun, right? This is supposed to be a party, isn’t it? There’s Blitzen. Blitzen, how are you? You good? Blitz, why is this party not for you? Rudy’s famous, but you’ve spent your whole career with your face chained to Donner’s fat ass and you haven’t blown your brains out, that’s fucking amazing.

Donner, sit down. Sit down. Don’t get pissed. I love you, Donner. You’re great. Look, everyone, Donner’s been around the world so many times he’s starting to resemble it!

Don, for real though, get healthy. Really. How are they going to deliver all those toys in one night if they have to keep stopping for you to catch a breath?

Of course, maybe it’s not your fault, Don. I mean, look at your role model. Santa over there. Hello, sir. Let me make it clear, when I refer to Santa as a role model that’s R-O-L-L. Right? Santa, you know, the kids would be thrilled if you took a single bite from one cookie, don’t think you have to clean your plate at each house.

Okay, though, we’re here for Rudy. Let’s talk about Rudy, let’s pay tribute to Rudy and his famous glowing nose.

Rudy and I shared a room when we were calves, you know. How well do you think I slept, that red light pulsating all night long? “Garrett, you look tired. Garrett, your grades are slipping. You need to put in more of an effort.”

Do I need to put in more of an effort, or does Rudy need to learn to sleep facing the wall?

God forbid, though, right? God forbid anyone should say something to Rudy, make him feel self-conscious. Right, Ma? Ma, where are you, you out there? There you are. Hey, Ma. My mother, ladies and gentleman. We were calves, my mother always used to say, “Garrett, look after your brother. Don’t let anyone give him a hard time on account of his nose.”

And I didn’t. Anyone gave Rudy a hard time, they’d have to deal with me. Right? And what would happen, some elf teases Rudy, I give that elf a kick, I get suspended. I get home and Ma says, “Why are you always fighting, what gets into you? What will the neighbors think?”

Always worried about the neighbors, my mother. I have no idea why. We lived next to Comet’s family, the only thing to worry about was the smell wafting over from their place and making everyone at our house sick.

Sit the fuck down, Comet. Sit down. You’d think a guy with a face like yours would know how to take a joke at this point.

Where was I? School, yeah. You know what I studied? Navigation. See, people don’t know this… some of you know this, old timers like me… but you young folks don’t know. You listen to that song and you think, Good thing Rudy came along that one foggy Christmas Eve. He really saved Christmas! You think that was the first foggy night in the history of fucking Christmas? You think an operation that can deliver billions of toys in twelve hours never accounted for fucking fog?

Navigation used to be an in-demand skill. Used to be an honorable thing, being the navigator. Used to be, you were a navigator, people looked at you with respect. Right? Yeah, you people don’t know. Rudy here, him and Santa killed an entire way of life in one night. Why, because the big guy felt bad for the freak with the nose? Rudy, Rudy to this day couldn’t tell left from right to save his life. Rudy, right now, top of your head, point south. Which way is south, right now?

Oh, look at that. Look at that face. I love that, that sort of dark shade the nose takes when he’s pissed. Little darker when he’s pissed, a little brighter when he’s happy. One thing you all probably don’t know about my brother, his nose is actually brightest when he’s… well, let’s just say… when we were kids, Rudy used to get home from school first, and I’d always know when the new Sears catalog had arrived because from outside the house it would look like the bedroom was on fire.

He was such a pervert, Rudy. It’s a miracle some elf bucket brigade never busted in on him with his pecker in his hoof.

Rudy, you figure out which way is south yet? Come on, Rudy. Guess. Come on. Tell you what, I’ll just tell you. Here’s a lesson for you, brother. We’re at the North Pole right now, so every direction is south from here.

It really is very, very impressive.